Ugh I’m exhausted. Absolutely exhausted Pandora. Whose idea was it to have a Feast party and Gift Giving party this holiday season.. MINE. I don’t think we’ll ever do that again. I’m so exhausted I cannot even think straight. I’ve been cooking, cleaning, and decorating to get everything ready for all the parties.

As predicted, Conn has been begging everyone for something this holiday season. Every time I turn around he wants something else: make Cosmo real; can I have a puppy. Frankly I’m over it. You’d think I taught him better; apparently not. 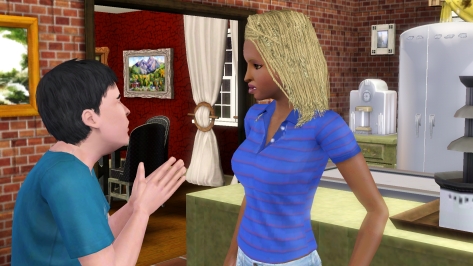 I tried to explain to Conn that we didn’t have room for Cosmo, maybe next year. Speaking logically to my son didn’t seem to help either. I told him that his Uncle Alaska would probably move out within the next year especially since things were going so well with Mariah. Then we’d have extra room for Cosmo. Do you know what MY son told me after I said all that: “Well if Patterns moved into your room, there’d be room for Cosmo. She could have his room.”

um Excuse me? Come again. The “relationship” I thought I was keeping from my son, wasn’t really a secret. He then went on to say “Mom, did you really think you could keep that from me?”

13, he’s suppose to be 13! ugh, there goes my logic. Pattern’s even AGREED with him. To me those were fighting words, and there was no way I was conceding to him this early in the fight. Pattern’s kept his room and I kept my room. 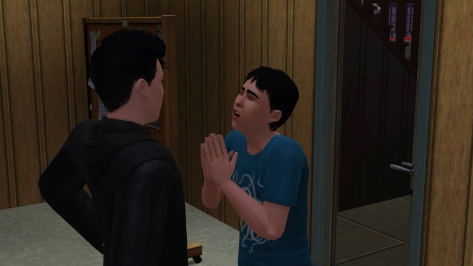 This has been the coldest Winter on record for Riverview that I can personally recall. First time since Conn has been going to school he’s missed school due to record amounts of snowfall. Of course he loved it. Unfortunately I still had to go work, being a first responder and all. Only essential Personnel was going to work those days: police, firefighters, medical personnel. Alaska of course had off, and since Patterns works from home, his digging through junk piles was curbed. Once the blizzard had passed, we all headed to park to play in the snow. 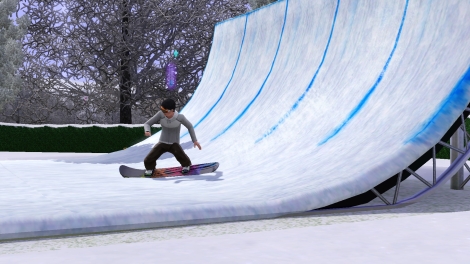 Although it was a lot of work, it was SO much fun having the feast party. It was too cold for Arizona to bring the twins (they are toddlers now) but everyone else showed up: Arizona, Jasper, Sun (her eldest), Aspen (second eldest), Solomon (third), and Scotty (fourth). There is nothing like family during the holidays. Sunny stopped by. She too left Mark at home. 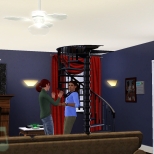 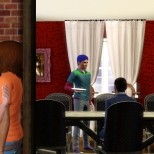 There’s Solomon in the orange shirt 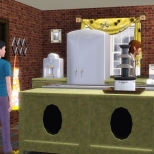 Gift Giving week rolled around and Mark got to spend the entire holiday week with us. Oh how I love my little nephew. Having him in the home bring so much joy. Everyone spends time with him. What pleases me the most is seeing Mariah spend so much time with him.

What kind of mother would I be, if I didn’t get my son what he wanted for Gift Giving Day. Actually Conn got everything he wanted for Gift Giving Day. Secretly Patterns and I had redecorated his room for Cosmo, and he’d moved his things into my room. We also went shopping and bought tons of clothes for Cosmo. It was so much fun. Conn’s dad called to discuss getting Conn a puppy. Since Conn stays with us I discussed it with A and Pattern’s who were both excited to be adding a puppy to the family.

So when Gift Giving Day rolled around, Conn got all he asked for. Pattern’s and I gifted him with the potion to make Cosmo real, with the stipulation that he’d have to wait until the day after Gift Giving Day to give her the potion; and His father brought the puppy over when he came to the party. Alaska and Mariah got the pet bed, toy box, and food dish for the puppy. 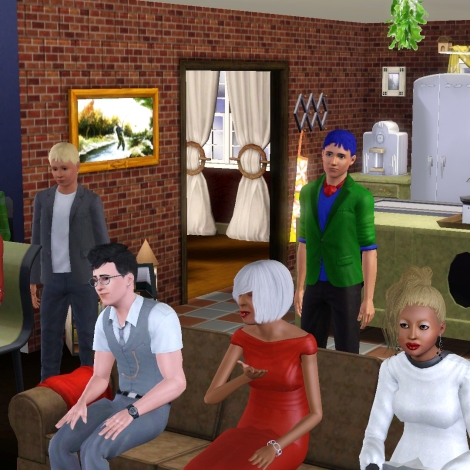 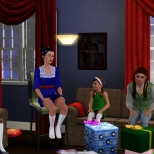 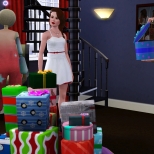 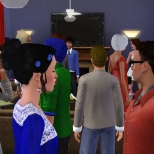 I think the bell of the Gift Giving Party was Mariah. Alaska took this time to propose to Mariah. Okay even I have to admit it was quite romantic. Mariah would finally be moving in rather than just spending every day and night sleeping at our house; bathing at our house; and eating all of her meals at our house.

And true to his word. The day following Gift Giving Day, Conn gave the potion to Cosmo. She is sooo cute. I can definitely foresee problems ahead. There will be no teenage pregnancy this generation. Teenage pregnancy begins and ends with me! 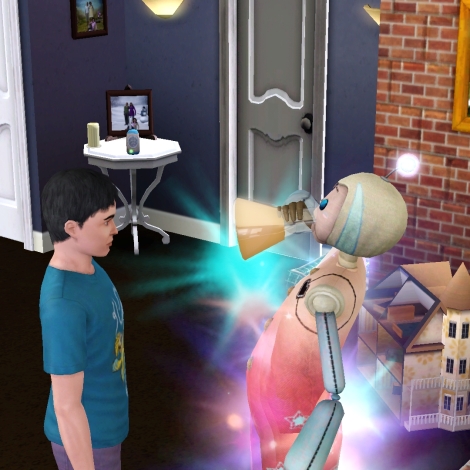 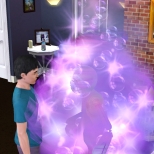 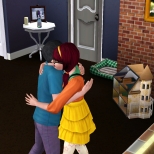 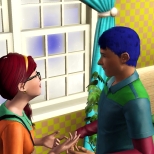 After meeting the family, Patterns took her up to her room as well as took time to talk with her about how discuss with her the changes she would be experiencing now that she was real. Cosmo admitted to already knowing a lot of Simming ways because she learned a lot from watching the family interact and talking with Conn. Did I mention how cute she is!

Conn named his puppy Hartford; cutest name EVER. Too bad Hartford isn’t as cute. Okay he’s adorable simply because he’s a puppy. The chewing he’s doing on the other hand: not so cute. Every time I turn around that damn puppy is chewing something. Chewing the couch; chewing the dinning chair, chewing the end table, chewing the porch bench. Scolding the puppy didn’t seem to make any difference. 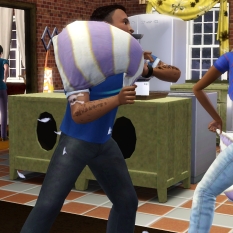 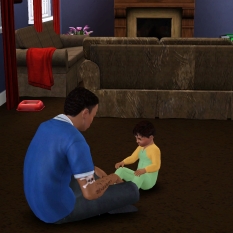 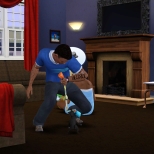 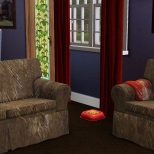 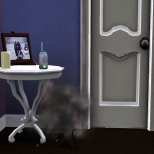 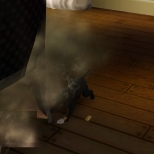 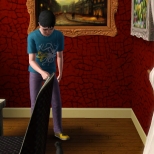 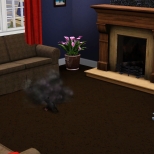 First and last puppy- EVER! Connecticut had better not ask for anything else as long as he lives. Mariah asked me to help her plan the wedding. I’m truly honored. And Cosmo is setting in to the real world quite nicely. Back to the daily grind. Until next time Pandora.