It was like Feast Day heralded in Winter and from then on it snowed non-stop. We were all spending time at the Winter Festival. Connecticut even tried ice skating. And I continued my romance with Tom over the phone, through the mail, and by email.

This year I let Alaska plan the Christmas Party, and we settled on a Red theme. Arizona even dressed the part.

But that’s not all. How ’bout I read in the paper, cause my good friend didn’t even have the balls to tell me, Sunny got married to Kenny shotgun style! (Kenny is Nikki’s ex husband). she showed up to the Christmas Party positively glowing. Word is she is pregnant! I knew she was in a relationship with Kenny, and seeing my brother on the side, but I thought for sure if she was ever going to marry, she would invite me! She didn’t invite Alaska either, but hey that’s understandable. 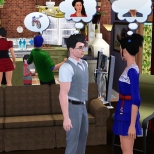 Craziest thing ever? Alaska didn’t even bat an eye. I thought for sure he would throw some type of tantrum. Instead, he carried on in typical Alaska fashion. I guess he wasn’t as in love with her as he claimed to be. 2 of his lady loves wedded and bedded to someone else, 2 lady loves remaining.

A few weeks before my trip to Bridgeport, I went down to the firestation to talk to Jeremy. I wanted to updated him on the situation between Tom and Me, including how Tom asked me to think about relocating to Bridgeport.

Suffice it to say, he didn’t take that information well at all. Can you believe he actually accused me of trying to take his son from him. ME! of all people. I was so pissed. I yelled, then he yelled. Our relationship took a huge hit. I’m not sure if it could ever recover. And to top it off, we argued right in front of Connecticut.

Why am I the one who feels terrible, when Jermey’s ass wasn’t even there for the first 10 years of Connecticut’s life. And now he makes me out to be the villian?

At the end of the day, Jermey decided that he wanted to spend more time with Connecticut. I very well couldn’t say no, now could I?

Connecticut now spends his afternoons after school with his father down at the firestation.

A few weeks following my blowup with Jeremy, I hopped a plane to Bridgeport. I was ready to take my relationship with Tom to the next level. I also needed to see what else the city of Bridgeport had to offer for me and my son.

Tom greated me with a warm hug. Just being in his arms made my heart beat triple time and my body quiver. I knew I had made the right decision about visiting him Bridgeport, as well as packing the pink nightie and heels.

While in Bridgeport I learned a few things: Bridgeport was colder than Riverview in Winter and Bridgeporters described the temperature as Brick Ass” when the temperatures dropped below freezing. I had to agree. It was unbelievably cold.

On a happy note, the magic and elation I felt while being with Tom in Riverview was still there with me in Bridgeport. We visited various parks around the city, he invited me to his home for a private dinner- just the two of us, we ate out at restaurants. It was magial.

I finally got up the nerve to put on the pick nightie and heels and invite Tom over. Things were going so well…

right up until he climaxed and called me Sugar. At first I thought I was mistaken. 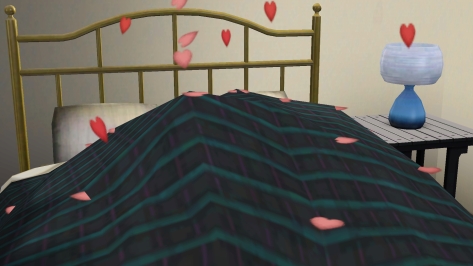 I went to sleep that night like nothing happened. The next day I kept calling Tom and calling Tom. His assistant informed me that he “wasn’t available- he was working”.

So to kill time until Tom finished work, I hit up a dive spot. Not one of my best ideas. I had way too much to drink, and before you know it, yep.. I was dancing on counters!

And you want to know what else, my great ideas kept getting better. Around 1am I went by Toms place. Could have swore I saw Sugar go into his building. I went and tried to call him thru the callbox. Again no one answered.
A drunk woman whose man called her another womans name while making love.. does crazy things

Such as visiting the park across the street from Tom appartment at 2 o’clock in the morning in order to use the telescope in an attempt to spy into his apartment.

There is a saying that goes “be careful what you ask for, cause you may recieve”. Yeah well, I received in abundance. Sure enough, I saw Sugar getting into Toms bed. Granted Tom wasn’t in bed with her, but I mean come on he has a one bedroom apartment, where do you think he sleeps? In a sleeping bag on the floor in the living room? Come on!

Like a bat out of hell, I went back to my placed and packed all my stuff. I slept for a few hours and left Bridgeport by midmorning. I wasn’t even heartbroken. I was MAD AS HELL! I had time to be heartbroken later.

Apparently, things weren’t great for everyone else back at home either. Patterns told me he approached Nikki and asked her about moving in together. Told her he was ready for them to create a family. He loved her. HE didn’t care which of them moved, Nikki moving in with us (dear God NO), or him moving in with her (dear GOD NO again). Nikki didn’t agree (thank you baby Jesus). Its not like I hate Nikki, cause I don’t. It’s just.. let’s be real. She left her husband and baby. She would do the same to Patterns. I mean Patterns is a hopeless romantic and just as family oriented as Arizona, and Nikki isn’t getting any younger. Patterns wants babies, simple as that.

I returned home to a broken hearted Patterns.

From the gossip around town, He and Nikki got into a heated exchange downtown, after he caught her dancing with some regular Joe from town. She basically told Pattern she didn’t want a family and didn’t love him the way he loved her. 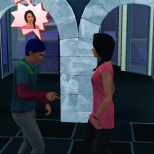 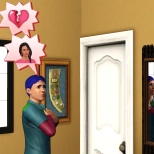 My poor Patterns. I didn’t even know what to say. The most I could do was offer him a shoulder to cry on. I was entirely too upset over my situation with Tom to even cry. I did tell my brother and Patterns that I wouldn’t be seeing him again. He was free to keep Sugar, he couldn’t have us both. This makes me think, maybe I didn’t love him as much as I thought I did.

And the drama just kept getting better. Spring had barely come into bloom when I recieved a call from Sunny a few weeks later that left me at a complete loss for words. She was crying and hysterical. She told me she didn’t know what to do. She was tired of lying to everyone. When I asked her about what, she told me..

yes the pause is for dramatic effect. I mean I couldn’t even believe it when I heard it. Are you ready for this Diary:

The baby she is carrying, isn’t her husband’s baby but Alaska’s baby. MY BROTHER! she was pregnant with my future niece or nephew. And to top it off, A didn’t even know. ( so if A didn’t know that meant Mariah didn’t know)

Finally I was able to speak.

I let her know, she would have to be the one to tell my brother. Not me. All I can say is..

It’s about to go down!