* Allow me to add this disclaimer. Unfortunately my save was plagued with error 12’s; I could not save the game. And whenever I did manage to save it had to be in edit town mode; and shortly thereafter my game crashed. After experiencing 2 weeks of crashing and inability to save I decided to pack up the family and move to Appaloosa Plains. No worries because it doesn’t change the story line I had going. My family now has enough room on their property for the horse and stuff I wanted them to have without constantly having to go to community lots. So I am happy about this. I apologize if this sections is written awkwardly or doesn’t flow as well as expected I had to come up with a reason to move the family. Continue enjoying the states.

Connecticut and Cosmo moved into Alaska’s old room after the wedding; finally sharing a room since they’d come of age. They are such newlyweds, Cosmo is always smiling and looking at her ring. I remember those days. How surreal it felt. After wanting and dreaming of being married, when it finally happens it is surreal. 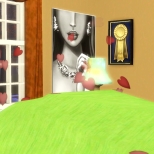 Connecticut and Cosmo decided that they wanted to stay with us for a year to save up and then move out on their own. Pattern’s and I gave Conn and Cosmo 100,000 simoleons a wedding present to jumpstart their savings. They had their eye on the new condo’s built in town and 100,000 only covered half their cost.

In typical newlywed fashion, at least State women history (by blood or by marriage) it wasn’t long after the wedding that Cosmo was caught running into the bathroom and throwing up. 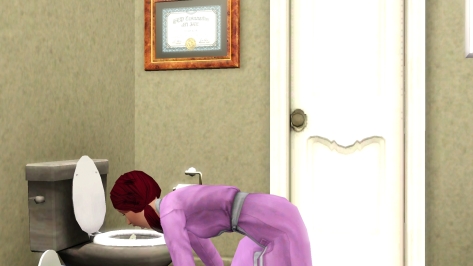 Yep, we ALL knew what that meant. 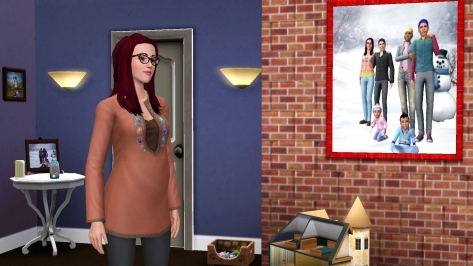 I was both flattered and apprehensive about the proposal. I’d lived in Riverview my entire life, my parents were buried here, my son and his new family, my sister and brother, nieces and nephews are here how could I leave. Initially I was going to say no. Cosmo was due to deliver any day; Pattern’s invention business was great. We had a great life in Riverview, no need to move.

It was Pattern’s that talked me into taking the position. He said that I was resisting change and standing in the way of progress. I’d become so renown other towns, cities, and states wanted me. This would be an opportunity that as I aged I would regret having not taken. With that in mind, I called my Connecticut and talked with him about it over the phone. Alaska and Arizona came over for dinner and we discussed me moving to Appaloosa Plains.

Much to my surprise they were all not only supportive but wanted to me too! Arizona said that she was retired and Tia and Darrick would be graduating high school soon and moving out; Scotty had two children and was engaged to his girlfriend. Basically all of her children were grown and successful and she felt comfortable moving.

Alaska on the other hand had small children; a pre-teen; triplet school age children and two toddler twins. A huge family to move. But to my surprise my brother told me he’d move. He’d watched out for me too long to stop now (HELLO I’m in middle adulthood A). But let me tell you I was one happy sister to hear this information.

By the summer we would be moving to Appaloosa Plains. Both Arizona and Alaska said they could move by then too. Connecticut and Cosmo surprised me too. They said they had both put in transfers to re-locate, however they wouldn’t be able to move when we did. Instead of the beginning of summer they’d move mid to late summer! I couldn’t be happier. My brother, sister, and son would be moving with me, Patterns and the kids to Appaloosa Plains.

The surprises didn’t end there however. As word got around that to the rest of the family that we would be moving, All of Arizona’s kids decided they too would move. They didn’t like the idea of Arizona moving away from them, not to mention me and Alaska too. As a family we got to together so much, it wouldn’t be the same with half the family in Riverview and half in Appaloosa. So now ALL the States were moving. WHOHOO! such exciting news.

Winter closed on an even happier note with the birth of my first grandchild! Cosmo gave birth to a beautiful baby girl whom they named Bristol. Gosh she’s cute as is all babies.

We threw a small party to say goodbye to family and friends; Patterns went over to Alaska’s to help with packing and before you know it. We were off to Appaloosa Plains 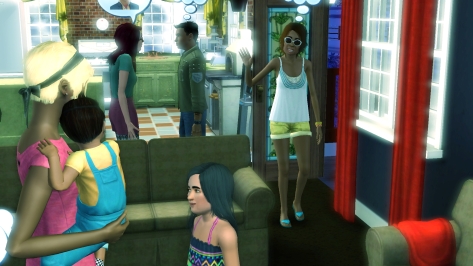 Because Connecticut and Cosmo wouldn’t be moving when we moved, they stayed behind to complete the selling of the house and it’s contents. We moved mostly our clothes and mementos. We purchased a new home in Appaloosa and hired a decorator (I’m not very good at decorating). Since the property back home in Riverview was small, we choose a large property in Appaloosa Plains.

The new property has a large garden; cows; chickens; even a training track for horses. Maybe if I have time I’ll even learn how to ride. Who knows. 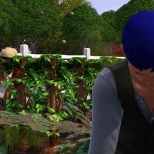 We weren’t at the new house long before Cali aged up to a child. Of course I missed her birthday as I was at work. But I said happy birthday once I got home.

I must admit she aged into a cute little girl! She gets it from me of course. 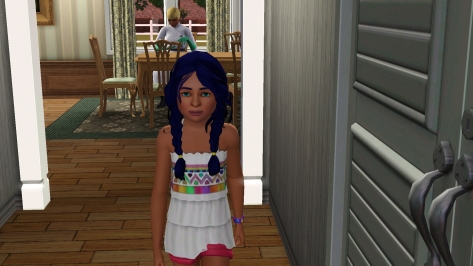 With so many of the family in town; most with children California’s age, she already has friends at school. Between Patterns, she and I, California is settling in the easiest. She has grown into quite the young lady and is very helpful around the house. She makes her bed, (sometimes her dad and I have to remind her) she collects the eggs from the chickens and keeps up with her homework. For the most part Cali eats breakfast and dinner at home; otherwise she is always with her cousins. She spends more time with them than she does at home. Although I must admit she takes time to spend with her baby brother. He too will be aging up soon.

Appaloosa Plains offers more than what was in Riverview. For starters the pool is outdoors and larger. It also has a wave station! brings back memories of Island Paradise. There is a real beach and not just canals. There’s a bet shop and a saloon. Unlike Riverview there isn’t a casino but who knows, maybe one will come to town. There are community gardens and an outdoor theater and just like Riverview there are seasonal festivals. We haven’t gone to the festival yet, but maybe for fall.

Summer ended with the arrival of Connecticut, Cosmo, Bristol and the dogs Derby and Hartford. Now I feel complete. We’re in a new town but it’s all good cause we’re surrounded by family. Everything is going to be alright. We’re settling in and adjusting. 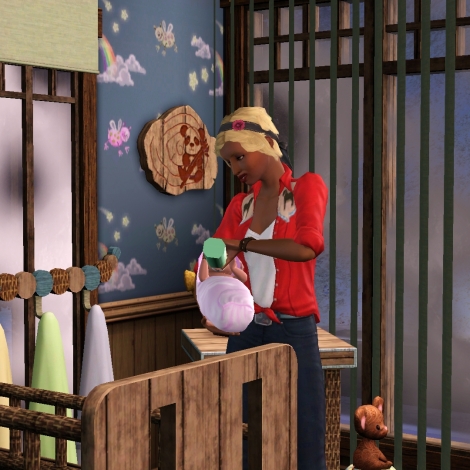 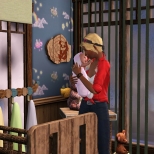 Dinner with Connecticut, Cosmo and a random neighbor 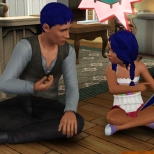 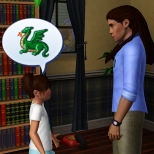 Aspen (my nephew, Arizona’s son) talking with his daughter River. You can see in the back that they’ve adopted Durham, Derby and Hartfords puppy